It sucks when you wake up the next day back at home after a music festival.

You coordinated with ideal friends to get off work early, what sets to see, and who the designated driver will be every night. Then you get there. Past the security and the entrance, you start to see eye-popping fashion you won’t see anywhere else. You hear some of the smaller stages playing a song you’ve never heard before but that will catch up with you by Day 2. You start to explore this multi-million dollar playground built for your appearance.

Right as you start dancing to the first set, the time starts to pass. And then, you’re home in your bed. It’s over. You’re sore and thinking of calling off from work tomorrow. The day after the music festival feels like a true loss. You knew it was a fleeting moment, but it felt like the biggest thing you did this year. You saw your favorite musicians and artists in one place in a scenic place. And now you can’t go back.

That’s what an amazing music festival does. It makes you depressed you’re still not there the next day.

That’s what III Points pulled off this past weekend. 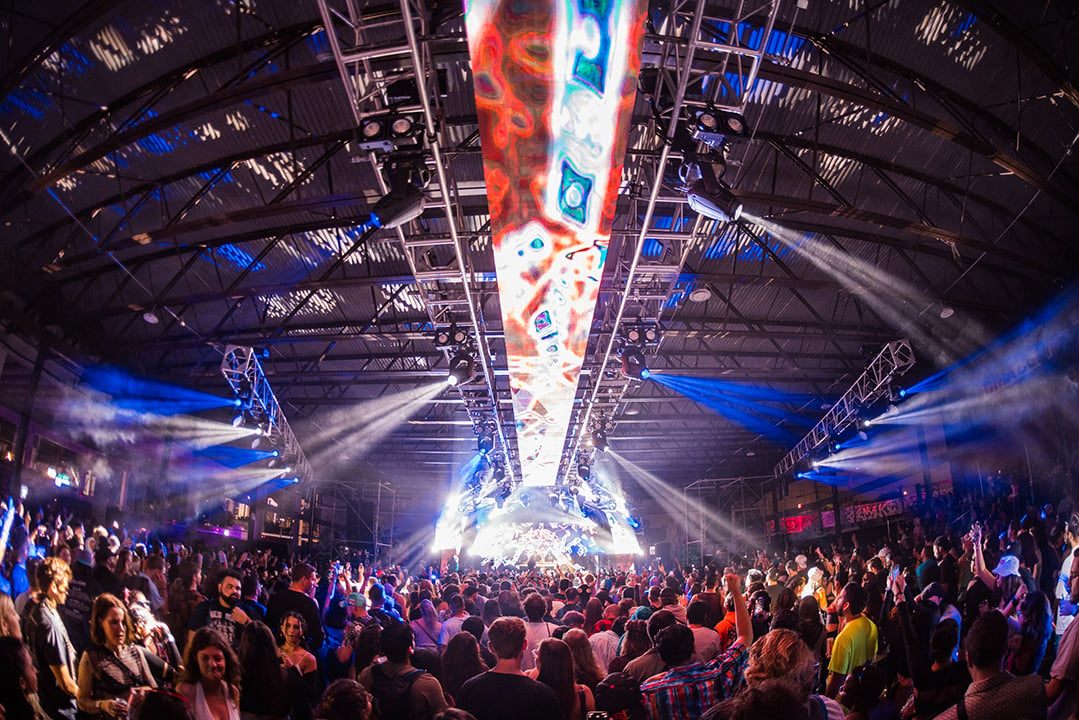 Across last Friday and Saturday, the music and arts festival pulled off its smoothest iteration in recent memory. This has to do with three key factors.

The lineup this year was more heavily electronic than previous years. Whether looking at big headliners or the opening acts, many of the musical talent at III Points 2022 had some incorporation of electronica in their art. For example, LCD Soundsystem headlined with divine renditions of hits from across their discography. From “Daft Punk is Playing in My House” and James Murphy riffing on the drums to a stunning take of “You Wanted a Hit,” each song had its rock edge laced with synthesized sounds. This similarity in soundscape allowed a lot of various acts present to be more viscerally connected than previously thought.

The venue festival also carried 11 different stages. That’s how III Points was able to have one stage with Tycho with a sunset slot, Joji taking bathroom breaks mid-set (in jest), and Rosalia serving an earthshattering set, while still being able to catch techno legends like Orbital, producers like Kenny Beats, and bands like La Femme without being lost in the literal noise. Even stages that had classically been dedicated to one genre all of a sudden had overhauls and inclusions of artists of various styles. The RC Cola stage on Saturday certainly did this with a curated lineup from Black Coffee that included himself, Busta Rhymes, Moscoman, and more. They may not normally flow together at other festivals. But at III Points, these acts certainly do.

Meanwhile, the set times were also set up brilliantly. For one, several stages including the main stage known as Mind Melt had rather large gaps between each set. This allowed a couple of things to happen. Festival goers could freely meander wherever with less anxiety about returning in time for the next headliner. Meanwhile, smaller stages had the opportunity to honeypot prospective listeners with unexpected gems. While walking from the Mind Melt stage (main) over to the RC Cola stage, there was a DJ set-up near the bathrooms where the DJ was dropping the heaviest techno. This happened around midday on the first day of the festival and it may have been Winter Wrong or Generous B. Either way, running into some kind of enticing, concentrated vibe was the norm at III Points. 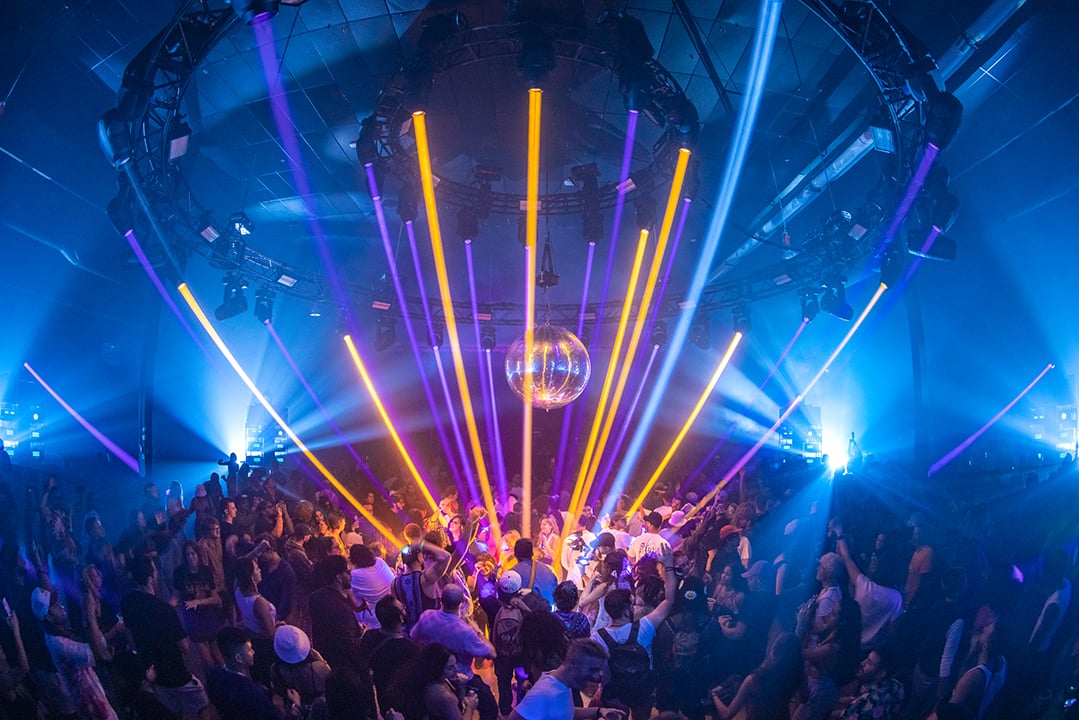 Aside from the musical acts, III Points outdid themselves in other departments too. There was a large collection of food stations, merchandise, and bars without the worry of long lines that could sacrifice time at any of the stages. Utility-wise, the venue also had a decent set up of restrooms for the general admission and the VIP, easy access to the free water, and a clear presence of medical staff and law enforcement.

Activity-wise is where things get a bit more interesting. There was a mini-replica of Downtown Miami’s cityscape. The inflatable model was just the right size to take great photos pretending to be Godzilla. There was also a limousine parked in one of the only interior sections of the festival. Around it were two bouncers, a red carpet, and velvet rope barriers. Inside were a group of people having the time of their lives laughing and smiling. I wasn’t quite sure if this was a special five-figure costing VIP option or if it was an art installation with very dedicated actors. Either way, it looked cool as hell.

But arguably and by far the most amazing facet of the evening was the Skate Park. Next to the Mind Melt and Outer Space stages was the building complex called Mana Wynwood. There, III Points organized a roller-skating rink with a tower DJ booth in the middle. They even had assistive devices for novices that looked like PVC-made walkers but on wheels. This allowed guests who have never skated but wanted to try a chance to give it a shot with a version of training wheels. It’s something I can’t think of any other music festival hosting or having. 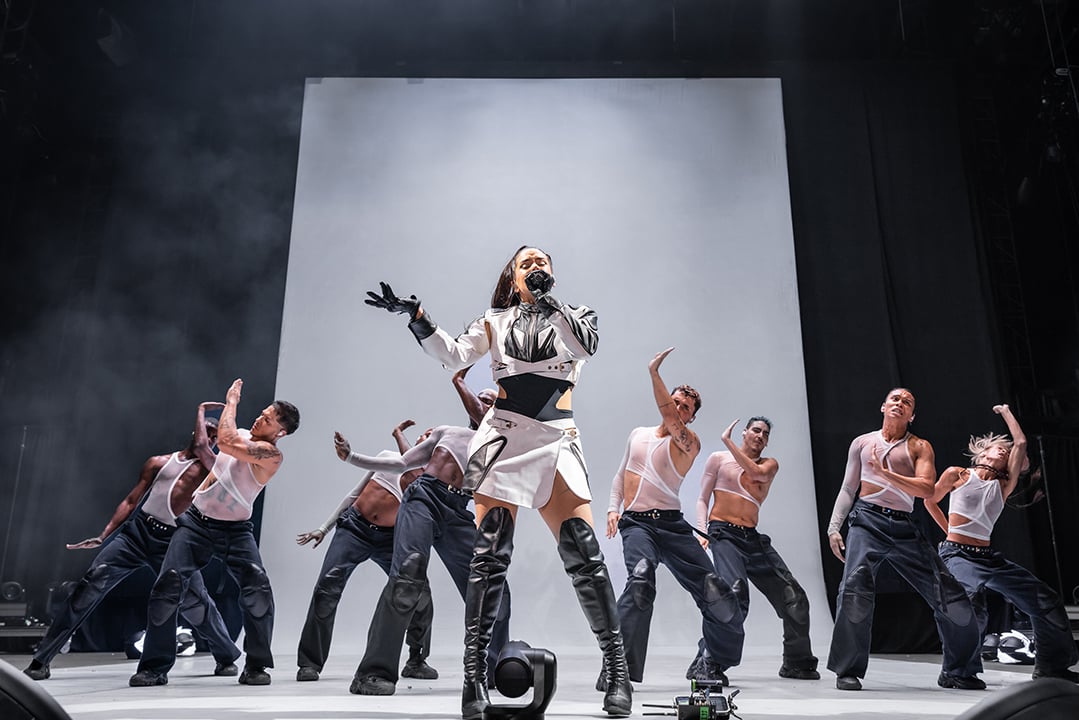 Some elements of a good festival are outside the control of the event organizers. They can swing in a way that can utterly detract from or ruin an event. In other cases, conditions can ride so smoothly that it elevates the experience from terrific to divine. Sometimes, a little luck goes a long way.

For example, the weather was perfect. The famous Miami humidity wasn’t going anywhere, but the temperature was cool between mid 70s and low 60s (a South Florida rarity even in late October). Past years have faced heavy rain or been cancelled due to encroaching hurricanes. And although this iteration of III Points still had some rain, it was akin to drizzling that felt more refreshing than anything else compared to the torrential downpour of the year prior.

Meanwhile the crowd was incredibly relaxed and friendly. Some music festivals can have hyper and immature audiences, especially when certain lineups contribute to overcrowding and claustrophobic conditions. None of these issues were a problem at III Points.

Two sets come to mind that highlight this. At Sector 3, the Marias played a set that amassed a fairly large crowd spilling into the street on Day 1. But rather than bunch up, most of the fans found a comfy spot, sipped their beers and swayed to their indie pop cadence. Meanwhile, Overmono commanded the Main Frame stage with a more robust and dense crowd. But even this crowd was easily navigable in comparison to other shows hosted in the same space throughout the years.

III Points is almost 10 years old at this point. It grew out of a necessity from the community to see the kind of acts you wouldn’t just see at Ultra Music Festival or Rolling Loud. Since then it has become one of South Florida must-attend events and this year continues to solidify that truth. With an impeccable lineup that delivered, superb organization, and everything else falling in the right place, III Points probably had its best year yet.

See you next year.

Credits: III Points and the Three Rules to Hosting a Music Festival [Event Review] | Your EDM

No comments to show.
We use cookies on our website to give you the most relevant experience by remembering your preferences and repeat visits. By clicking “Accept All”, you consent to the use of ALL the cookies. However, you may visit "Cookie Settings" to provide a controlled consent.
Cookie SettingsAccept All
Manage consent

This website uses cookies to improve your experience while you navigate through the website. Out of these, the cookies that are categorized as necessary are stored on your browser as they are essential for the working of basic functionalities of the website. We also use third-party cookies that help us analyze and understand how you use this website. These cookies will be stored in your browser only with your consent. You also have the option to opt-out of these cookies. But opting out of some of these cookies may affect your browsing experience.
Necessary Always Enabled
Necessary cookies are absolutely essential for the website to function properly. These cookies ensure basic functionalities and security features of the website, anonymously.
Functional
Functional cookies help to perform certain functionalities like sharing the content of the website on social media platforms, collect feedbacks, and other third-party features.
Performance
Performance cookies are used to understand and analyze the key performance indexes of the website which helps in delivering a better user experience for the visitors.
Analytics
Analytical cookies are used to understand how visitors interact with the website. These cookies help provide information on metrics the number of visitors, bounce rate, traffic source, etc.
Advertisement
Advertisement cookies are used to provide visitors with relevant ads and marketing campaigns. These cookies track visitors across websites and collect information to provide customized ads.
Others
Other uncategorized cookies are those that are being analyzed and have not been classified into a category as yet.
SAVE & ACCEPT